<P>Background: Improved bioavailability of Aceclofenac (ACE) may be achieved through proniosomes, which are considered as one of the most effective drug delivery systems and are expected to represent a valuable approach for the development of better oral dosage form as compared to the existing product. However, the carrier in this system plays a vital role in controlling the drug release and modulating drug dissolution. Accordingly, a comparative study on different carriers can give a clear idea about the selection of carriers to prepare ACE proniosomes. <P> Objective: This study aims to evaluate the role of maltodextrin, glucose, and mannitol as carriers for in vitro and in vivo performance of Aceclofenac (ACE) proniosomes. <P> Methods: Three formulations of proniosomes were prepared by the slurry method using the 100 mg ACE, 500 mg span 60, 250 mg cholesterol with 1300mg of different carriers, i.e., glucose (FN1), maltodextrin (FN2), and mannitol (FN3). In vitro drug release studies were conducted by the USP paddle method, while in vivo studies were performed in albino rats. Pure ACE was used as a reference in all the tests. Lastly, the results were analyzed using the High-Pressure Liquid Chromatography (HPLC) method, and data were evaluated using further kinetic and statistical tools. <P> Results: No significant differences (p > 0.05) in entrapment efficiency (%EE) of FN1, FN2, and FN3 (82 ± 0.5%, 84 ± 0.66%, and 84 ± 0.34% respectively) were observed and formulations were used for further in vitro and in vivo evaluations. During in vitro drug release studies, the dissolved drug was found to be 42% for the pure drug, while 70%, 17%, and 30% for FN1, FN2, and FN3, respectively, at 15 min. After 24 hrs, the pure drug showed a maximum of 50% release while 94%, 80%, and 79% drug release were observed after 24 hr for FN1, FN2, and FN3, respectively. The in vivo study conducted on albino rats showed a higher Cmax and AUC of FN1 and FN2 in comparison with the pure ACE. Moreover, the relative oral bioavailability of proniosomes with maltodextrin and glucose as carriers compared to the pure drug was 183% and 112%, respectively. Mannitol- based formulation exhibited low bioavailability (53.7%) that may be attributed to its osmotic behavior. <P> Conclusion: These findings confirm that a carrier plays a significant role in determining in vitro and in vivo performance of proniosomes and careful selection of carrier is an important aspect of proniosomes optimization.</P> 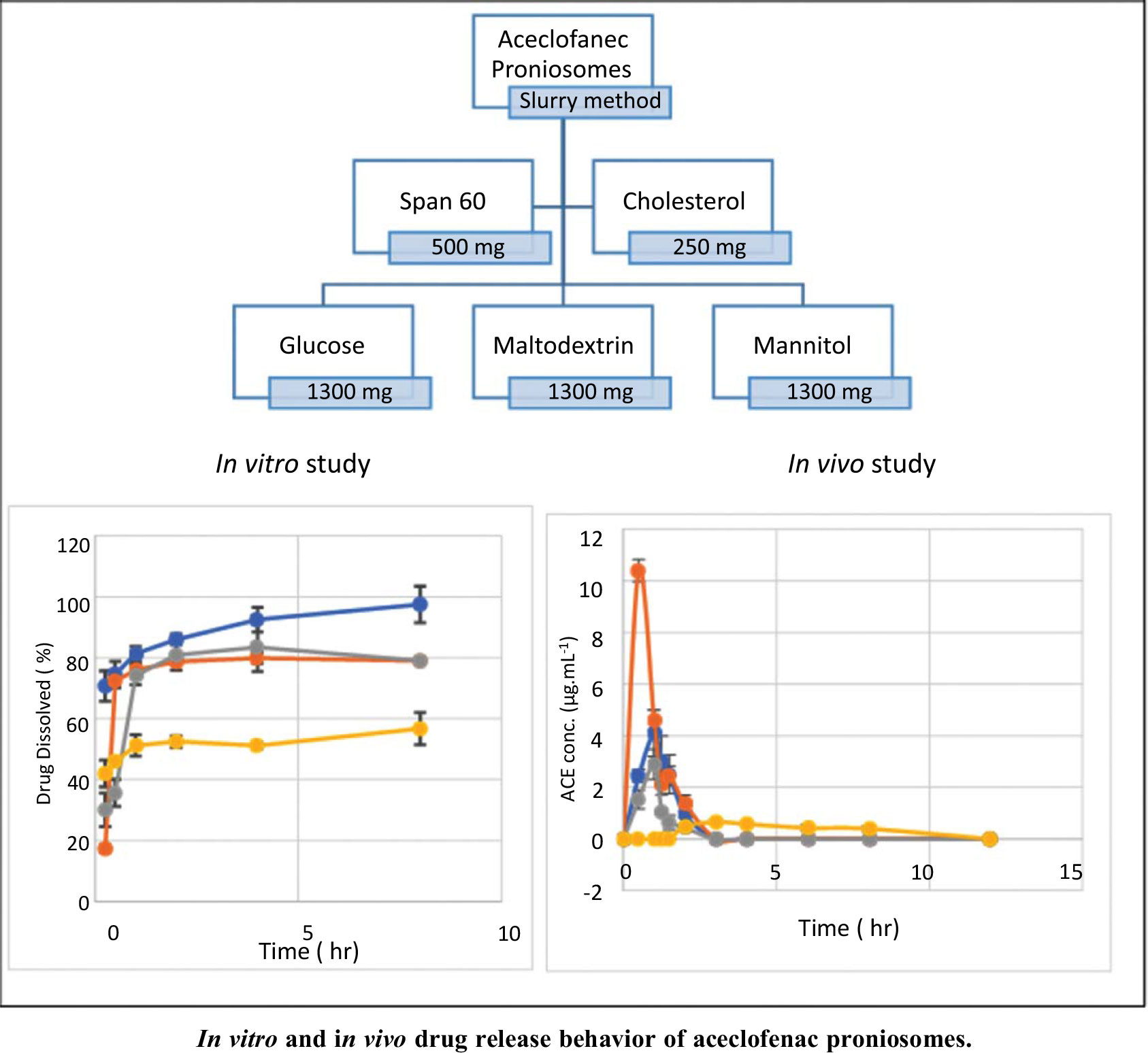